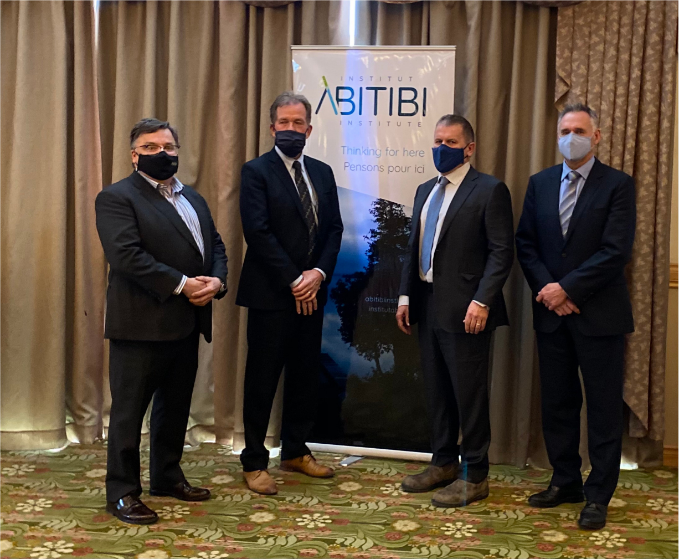 Two of northern Ontario’s top mining executives, one of whom has since become a prominent politician, are stepping up to bolster the economy and heighten the profile of Timmins and the surrounding area.

On March 25, Kirkland Lake Gold President Tony Makuch, and Timmins Mayor George Pirie announced the formation of the Abitibi Institute, a Timmins-based think-tank that will conduct deep, non-partisan research into the region’s economic potential. Timmins-born Makuch is the chairman of the newly formed group, while Pirie, as mayor of Timmins, is the honourary chairman.

Without pointing fingers, it’s clear from the outset that both men feel the region has long been overlooked by senior levels of government.

“We have all watched industry pack up and leave our region, or refuse to expand, or relocate here; citing reasons that just don’t make sense to us,” said vice-chair Gaetan Malette, a member of the pioneering Malette lumber family.

“Timmins and the Cochrane district form the economic heart of Northern Ontario – we know that with thoughtful and unbiased research, it can be easily demonstrated,” Malette added.

“For almost as long, the forest sector was carved from our abundant wilderness –  built by entrepreneurs from nothing to world class enterprises, only to see that industry reduced to a footnote of what it once was.”

Makuch, for his part, was equally blunt. “My career in mining has taken me around the world, so believe me when I tell you that our region, Ontario’s north, holds its own against any international jurisdiction and I’m prepared to do anything I can to promote and help us achieve our unlimited potential.”

“But if I’m being honest with you, and you’re all my friends, so of course I’m being honest with you – I’m worried that we won’t have the human capital to grow the region’s untapped potential. We need strong communities, and that means a diverse economy. We can’t continue to be a one-trick-pony that relies solely on mining. I want our workers to live in the community, not just at the camps we build. I want their kids to go to local schools, their spouses to have meaningful work in the towns we support, and their families to grow generation after generation.”

Timmins Mayor George Pirie, the honorary chair of the organization, says it is long overdue that Timmins and the surrounding region become important on the provincial and national stage.

“As mayor, I’ve had a front row seat to the challenges we’re facing. Declining populations, businesses shuttering their doors and moving out. Aging populations.

Pirie says the the challenges aren’t unique to Timmins.  “Across our region we’re seeing the same thing. And that’s why I’m so pleased the Abitibi Institute, to start, will focus on the region, exploring the issues that are unique to us.”

The founders say the Institute is not designed to solve problems. What it will do, they say, is provide the facts to important questions like: Why can’t we use crown land for development? And why are our energy costs so high?

“I appreciate that the Institute isn’t looking for government funding,” said Pirie. “No grants, contribution or other funding applications will ever be made to any government. We can’t be afraid to speak the truth. We can’t commission research to fit a pre-existing assumption or narrative. But what we can do, is take up the future in our own hands and build for ourselves.”

Pirie says the institute will receive no tax dollars from Timmins, nor will it solicit funds from any town in the region.

“Tony said it clearly: we want this organization to survive our tenure.  Our success will be measured by the economic activity it stimulates here in Timmins and the entire economic region.”

Pirie told the 40 people who socially-distance-gathered for the event at Cedar Meadows that they would be called upon to volunteer, or provide input to help tackle the hard questions and research needed to stake the region’s claim on the global stage.

“I urge you, when called upon, to take the time to consider being part of this important journey.  This will only work if we all work together,” he said.